Algae in the Aquarium

Algae growth is a sign that the aquarium's ecosystem is getting out of balance.

To prevent excessive growth and problems in the aquarium, prompt action is important. Algae in aquariums are generally quite easy to control.

The term algae refers to an incredible variety of different creatures whose habitat is water and which carry out photosynthesis. However, some types of algae also grow outside the water, for example on trees or on the thawing snow of mountains.

Algae are divided into micro- and macro-algae according to their size. Microalgae include microscopically small algae species. Macroalgae, on the other hand, are visible to the naked eye. Depending on the species, they can reach a size of a few millimetres up to 60 metres.

The exact number of different types of algae is unknown. Estimates vary from a few tens of thousands up to several million different algae worldwide.

There are no completely algae-free aquariums

Of course not all algae in the aquarium play a role. Nevertheless, there are countless species that aquarists may encounter.

Regardless of this, it should be clear that a completely algae-free aquarium does not exist in reality. There are tanks that seem to be free of algae in a purely optical sense. But even in these aquariums microscopically small representatives of this species normally live.

Invisible to the naked eye, they form a biofilm with other microorganisms that populates practically all surfaces of the aquarium and is an important part of the aquatic ecosystem.

This is perfectly normal and nothing to worry about. It only becomes problematic when the algae in the aquarium get out of hand or even a so-called algae bloom (mass reproduction) occurs.

Causes for algae in the aquarium

An aquarium is a sensitive ecosystem that can easily get out of balance. One of the consequences of this is the excessive formation of algae.

Algae are extremely frugal. Nevertheless, they naturally need nutrients in order to grow. For this reason, they appear, for example, whenever there are not enough aquatic plants or the water is not changed regularly.

In addition, an excessive fish population also ensures that algae find ideal living conditions in the aquarium. After all, the inhabitants of the aquarium live exclusively in the water and naturally do their business there.

The more fish that are kept, the more excrement is released into the water and the more nutrients are available for algae. The same applies if too large quantities of fish food are put into the tank and thus food remains in the water, decomposes there and serves as food for the algae in the aquarium.

Avoid algae in the aquarium

Ideally, the excessive formation of algae in the aquarium should be avoided from the outset. With some simple behaviours this is usually quite possible.

To avoid algae in the aquarium, the following things in particular have proven to be effective:

Fight algae in the aquarium naturally

If you want to fight the algae in your aquarium, there are various natural methods available. Because nature has numerous algae eaters that can be considered as aquarium inhabitants.

For example, there are various species of snails such as racing or antler snails, which take great pleasure in silica and spot algae in the aquarium and can thus help to keep algae formation under control.

Another possibility is the use of Amano algae shrimps, which prefer to eat green algae and thread algae.

In addition, there are also a number of fish that can help with algae in the aquarium. In addition to many species of carp, various catfish in particular, such as the brown antenna catfish, have proven to be extremely reliable algae eaters. 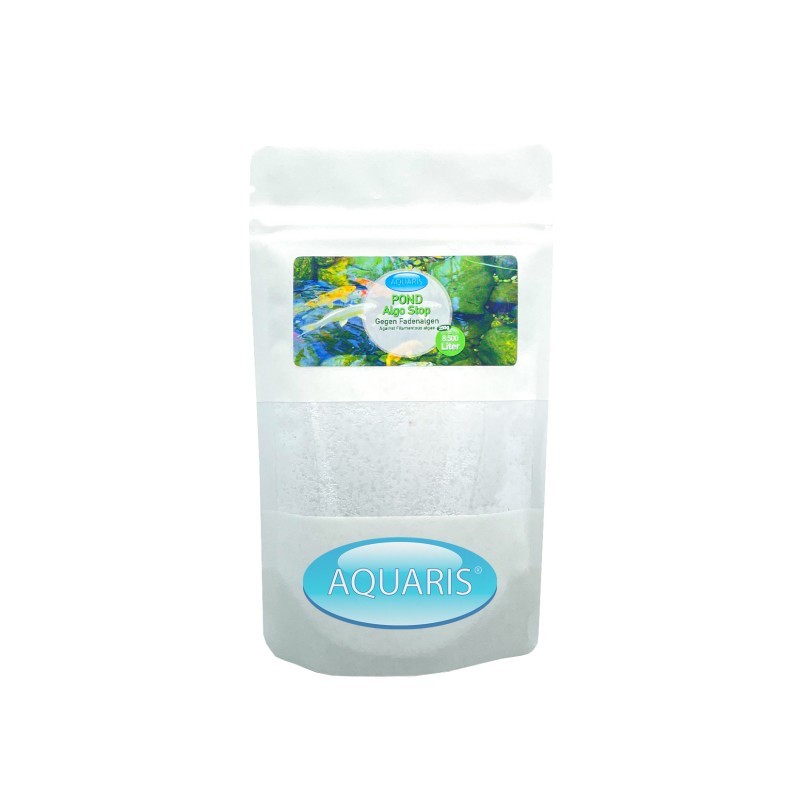 Manual removal of algae in the aquarium

In addition to the use of algae-eating aquatic animals, newly set up aquariums in particular should be checked for algae on a daily basis if possible. Algae in new aquariums can often be removed quite easily by hand. A magnetic window cleaner is also very suitable for cleaning the windows.

Get rid of algae in your aquarium with Aquaris Algen Stop

If you do not succeed in removing the algae in your aquarium, we recommend Aquaris Algen Stop for support. The preparation enables a mild, biological control of algae and effectively counteracts a strong infestation.

Aquaris Algen Stop not only helps against existing beard, green, blue and brush algae, but also prevents the formation of new algae in the aquarium.

29.10.19 0 Comments Oliver
Having an aquarium is not as simple as it first seems. Even high-quality ornamental fish food sometimes cannot prevent the sensitive ecosystem from becoming unbalance from excessive algae forming in the aquarium. Aquatic plants need fertilizers from...
Read more