My Cat Breathes Rapidly: What Could Be the Reason?

The normal breathing rate for cats is 20 to 30 breaths per minute. If a cat breathes quicker than that, it can have several causes, which can be either harmless or dangerous. In the following, we will explain possible reasons why your cat might be breathing quickly, what you can do in each case and when you should be concerned about it.

How Can I Recognise an Increased Breathing Rate in Cats?

If your cat is breathing too quickly, you can usually tell from a variety of symptoms. You will often see the chest or the stomach of the four-legged friend moving quickly. In addition, your cat is likely to pant and may cough and choke.

Apart from that, the breathing may be accompanied by unusual noises, and your cat may seem either lethargic or restless. Another possible symptom that can appear along with rapid breathing is blue discolouration of the gums and tongue of the cat. You should take this seriously, as it is a sign of acute shortness of breath.

What Are the Causes for Rapid Breathing in Cats?

Rapid breathing in cats can be due to a number of causes. Some of these are harmless, while others require prompt treatment.

Common causes of rapid breathing in cats include the following triggers:

Cats are known to spend a lot of time relaxing and dozing off. However, that does not mean that the four-legged friends do not like to run around as well. Young animals in particular sometimes tend to go beyond their limits and exhaust themselves.

If your cat has worked particularly hard playing and romping around, it is normal for it to breathe quickly. The breathing rate usually returns to normal on its own within a short period of time and you don't have to worry. If they have already visibly exhausted themselves and are not calming down, it can make sense to slow them down a little so that they do not overexert themselves completely.

As you probably know, cats can be very sensitive and jumpy. If your four-legged friend feels stressed or is afraid of something, this can also be noticeable through fast breathing.

For the benefit of your cat, you should avoid situations which potentially lead to excessive stress or anxiety. For example, make sure that your four-legged friend is not harassed or annoyed by your children and always has the opportunity to hide. 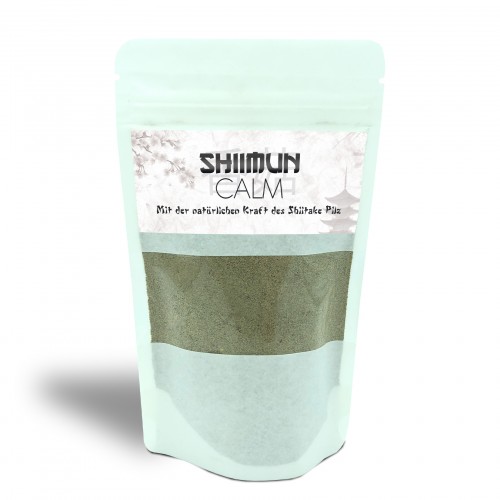 Not all situations that can cause stress and anxiety in a cat can be avoided. If you need to take it to an appointment at the vet for example, you won't cancel it just because you don't want your cat to get nervous and breathe too quickly.

In order to make such situations as stress-free as possible for your four-legged friend, we have developed Shiimun Calm, a special shiitake-based dietary supplement for cats.

Thanks to its special recipe with ingredients such as brewer's yeast, green tea and shiitake, Shiimun Calm can make a decisive contribution to making it easier for your cat to relax.

Get to know Shiimun Calm for cats.

Cats Breathing Rapidly due to Heat

Heat is another possible cause if your cat is breathing quickly. If for example your four-legged friend has been in the sun for a long time in summer, its body may overheat. In this case, the cat's quick breathing serves to regulate its body temperature.

Unlike you, your cat has only a few sweat glands, therefore sweating is not a suitable way of regulating their body temperature. There is usually no cause for concern if a cat breathes a little faster in the heat. In summer, simply provide your four-legged friend with fresh water and suitable places to rest in the shade.

In this context, however, keep in mind that there is a risk of heat stroke. If your cat not only breathes quickly, but you also notice symptoms such as apathy, shortness of breath, chills or convulsions, you should therefore assume heat stroke and take your four-legged friend to the vet immediately.

Rapid Breathing in Cats due to Illness

Unfortunately, the cause of increased breathing rates in cats is not always harmless. In some cases, a cat may breathe quickly because it has an illness. This is often the case, for example, in animals with heart diseases such as hypertrophic cardiomyopathy (HCM). Apart from that, an infection with cat flu or an overactive thyroid gland can become noticeable with rapid breathing.

If you find that your cat is often breathing too fast and you notice other symptoms, such as a lack of appetite, fever, fatigue or cough, we recommend that you make an appointment with the vet as soon as possible. After all, for many cat diseases it is of crucial importance for a positive outcome that the appropriate treatment measures are initiated as early as possible.

As you can see, there are many possible causes of rapid breathing in cats. Fortunately, in most cases there is nothing to worry about.

However, if your four-legged friend is obviously suffering from shortness of breath or other symptoms appear, you cannot avoid a visit to the vet. You should therefore always keep an eye on your cat and do not hesitate to act quickly if there are serious health problems.