Development of Kittens – from Birth to Puberty

Kittens develop at an incredible rate in the first few weeks and months of their lives. What was just a helpless ball of fur quickly grows into an adventurous animal. Below we will take a closer look at the development of kittens during the first months of life.

Kitten development – the main points at a glance

Development of kittens in the first days after birth

After birth, the kittens are initially completely helpless. They can neither hear nor see. They don't have any teeth yet and their fur is still very thin. In order to maintain their body temperature, they depend on the warming physical contact with their mother and siblings.

In the first few days, the kitten's abilities are pretty much limited to drinking their mother's milk. Other than that they sleep most of the day or have their mother clean their fur.

Development of kittens between the second and fourth week of life

In the second week after birth, the kitten's eyes and ear canals slowly open. However, it will take a few more weeks before the sense of sight and hearing are fully developed.

In the second or third week, the kittens' milk teeth also break through and the little four-legged friends start their first attempts at walking, since they had previously only moved around by crawling.

Development of kittens until the eighth week of life

Although the kittens still sleep a lot, they become increasingly active at the beginning of the second month of life. They begin to be more aware of their environment, to clean themselves and to frolic around with their siblings.

Now the socialisation phase begins, in which the kittens begin to discover their immediate surroundings. In order to promote the development of the kittens, they should be actively exposed to experiences they have not had before, such as dogs, unfamiliar people or even everyday objects and noises.

Be aware that the experiences in this development phase have a decisive influence on whether the kitten will later become a confident cat. It is therefore very important that you provide the right framework and accompany the little kittens as they gain experience. Of course, you should always ensure that their surroundings are safe and that the kittens do not sustain any injuries as they explore the house.

Development of kittens until the twelfth week of life

The third month of life is still very important for the socialisation of baby cats. At this age kittens develop relationships with humans and learn how to interact with each other in a group. This time has a great influence on the later character of the little four-legged friends.

In order to build a bond with the kittens, it makes sense for the future owners to visit the kittens regularly and keep them busy. However, the move to the new home should take place at the earliest at the age of ten weeks or ideally even at twelve weeks. If the kittens are separated from their mother and siblings earlier, this can have a lasting negative impact on the development of the kittens.

The development of kittens into young animals

At the age of about four months, the kittens gradually begin to develop into young cats. Almost like teenagers, the four-legged friends are now entering puberty and often put the patience of their owners to the test in everyday life. Depending on the sex and cat breed, the animals usually become sexually mature at around six to ten months. Now is the time to think about neutering your cat.

The development of the kittens' weight

When can kittens have solid food?

After birth, the little kittens only feed on their mother's milk. After three or four weeks, they can eat solid food for the first time. At the age of six to eight weeks, the kittens are weaned and only eat solid food.

To meet their nutritional needs and ensure healthy growth, kittens should not be fed regular cat food. Instead, the growing four-legged friends should have food especially for kittens. 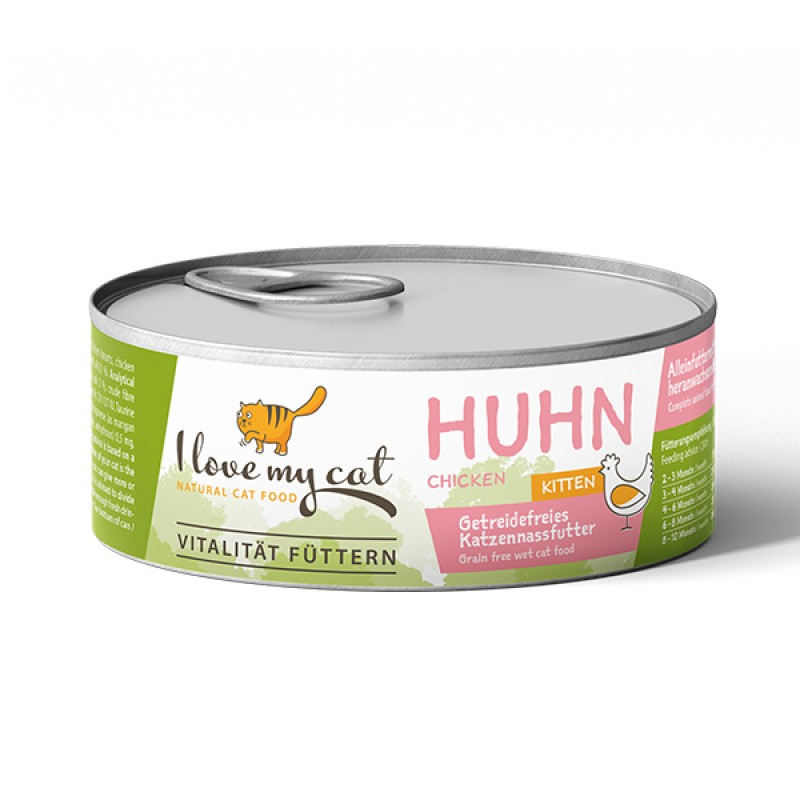 When buying food for your baby cats, make sure you choose good quality and natural ingredients. The kitten wet food from I love my cat offers you both and allows you to optimally promote the development of your young cats in the first months of life.

Get to know our Kitten wet food.

When do kittens need to be seen by a vet?

At eight weeks of age, it's time to take the kittens to the vet, where they will receive their first vaccinations, so that they are protected against cat diseases such as cat flu and cat plague.

For complete vaccination protection, the little four-legged friends must receive several vaccinations at fixed intervals as part of the so-called basic immunisation. In adulthood, the cats then need regular booster vaccinations.

As you can see, a lot happens in the first few weeks and months after the kittens are born. In no time at all, the kittens develop from a helpless ball of fur that cannot even regulate its body temperature into an adventurous cat that is curious about its surroundings and hopefully has a long and healthy cat life ahead.